Due largely to climatic and edaphic factors, verdure in Sindh, limited as it is to four main tree species, lacks much in variety and pays little in dividends. This stagnancy has to be ended, especially now when stupendous advances in science and technology have brought it within the realm of possibility. Such, indeed, is the raison d'etre of forestry research in SFD.

Undaunted by perpetual financial constraints, the research wing has forged ahead and done considerable work to demonstrate and establish how exotic tree species can be rewardingly grown under irrigated conditions so as to make forestry more profitable and to satisfy the ever growing variety of needs of the people and the industry.

The research began in 1949, when two research stations were established, one each at Miani and Khathar, under the auspices of the newly created silviculture research division. The objective was to improve the quality of planting stock by evolving the most suitable planting techniques through trials on various indigenous as well as exotic tree species. The trials focused on finding the silvicultural requirements i.e. spacing, rotation, watering, growth and behavior of each species.

In the initial period, trials on planting technique on Populus euphratica (Bahan) were started through root-suckers and seed collected from phenotypically superior trees. Besides Simal (Salamalia), various species of Eucalyptus and Acacia nilotica were tried at nursery and planting stages. In the early sixties, Diospyros melanoxylon (Biri) was introduced to propagate it as a cottage industry to discourage smuggling of Biri leaves from India. Besides, various clones of poplar were introduced by establishment of populatum at Miani and Kharthar research stations. An arboretum of various species has been established for collection of seed and study of silvicultural characteristics.

In the early seventies a research sub-station was established at Mirpur Mathelo to try shisham, poplar and bahan, which are well suited to the ecological requirements of upper Sindh.

In lower Sindh, in order to conduct trials on effluent water of Left Bank Outfall Drain (LBOD), a small research station at Boharki Forest in Badin district was established. The objective of the experiment was to conduct trials on various salt-resistant species under saline conditions by utilizing saline effluent. The study was completed in 1993 with screening of 3 species, Conoearpus lancifolius, Casuarina equisitifolia and Prosopis juliflora to be tolerant to withstand saline water upto electrical conductivity of 3.5 mS/cm. Similar experiment is also underway on the effluent of Khudan Pataji Outfall Drain (KPOD).

During the year 1998, a research trial on extraction of Neel or Indigo from Indigofera tinctoria was conducted in collaboration with a NGO at Miani in order to revive the. age old extraction of Neel from the plant. The seeds were obtained from India. Seven kilogram Neel was extracted by employing the conventional method. The experiment is being repeated at Miani during the year 1999.

The research studies on various species have yielded following results:

A- Y-48 and A-65-183 strains of Poplar are suitable for Lower Sindh. Conoearpus laneifolius is suitable for saline soils and can withstand soil salinity upto 5 dS/m (electrical conductivity) and pH upto 8.4. It is suitable for timber purpose and its longitudinal grain strength properties are superior to Shisham and inferior to Babbur. Due to its granular appearance, it can be used in furniture articles after planing. Moreover, various exotic Acacias like Acacia aureculiformis, Acacia elata, Acacia albida and Acacia victoria have proved successful in irrigated and semi-irrigated tracts of Sindh.

The technical notes on different experiments are published and distributed by the research wing in the field/agencies, so as to keep all concerned informed of trial results. The wing also provides good quality seed and planting stock to various forestry divisions as well as to tree farming communities and NGOs. Besides, it collaborates in some of its programmes with Pakistan Forest Institute Peshawar, Punjab Forestry Research Institute Faisalabad, Atomic Energy Agricultural Research Centre Tando Jam and other research organizations of the country. 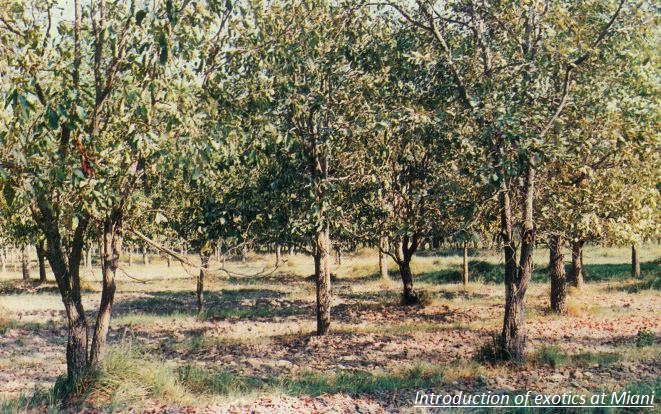 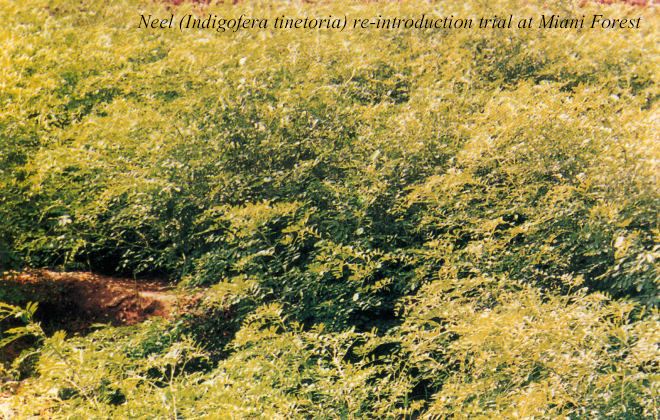 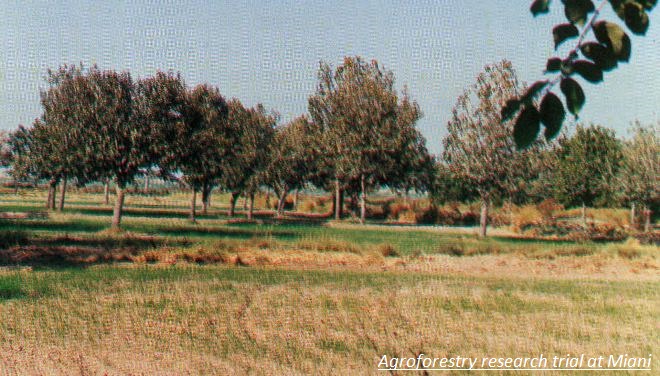 The first ever scientific study on hurris vis-a-vis their effect on soil was conducted in 1991-92 and 1992-93 by Dr. G.R. Keerio, the then Divisional Forest Officer of SFD in connection with his doctorate from the University of Idaho, USA. Findings of the study were reported in his doctoral dissertation, which are summarized hereunder:

That hurris enriched soil by reducing Ec, pH and Na, and increasing N content and organic matter.
That hurris improved physical properties of soil.
That after harvest of hurri, the yield of wheat crop increased upto 20% for 4 years without the aid of synthetic fertilizers.
Sericulture

The sericulture programme was started in 1975 at Miani on experimental basis. Having proved successful, it has now been extended to Hyderabad, Tharparkar, Sanghar, Sukkur and Ghotki districts. The funds for this programme were provided by the provincial and federal governments. Imported and local varieties are used for rearing silkworms, and two to four crops are harvested annually during spring and autumn. The directorate, which conducts this programme, also provides technical know-how to rural families so that they may augment their incomes through silkworm rearing. The SFD has produced more than 10,000 Kg. of cocoons (silkworm sheath) during the period of last two decades. 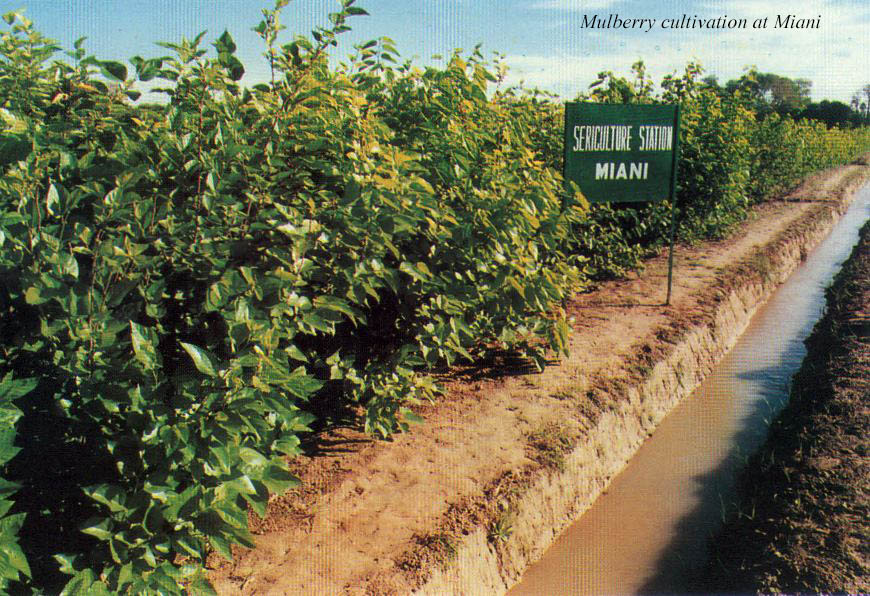 Started in 1983 in collaboration with the Pakistan Agriculture Research Council (PARC) this modest scale programme is concerned with production of pure honey by rearing bee colonies, which are also provided to interested bee formers together with technical guidance. The main objective of the programme is to teach the rural community the techniques of bee-keeping so that they may work it as a cottage industry; an additional occupation to earn more. Apiculture has been successfully introduced in all the climatic zones of Sindh, for which bee queens are imported from Australia. As regards production, 4,500 Kg. of pure honey have so far been produced under the programme, which is headed by the same directorate (Directorate of Sericulture) which runs the sericulture programme. 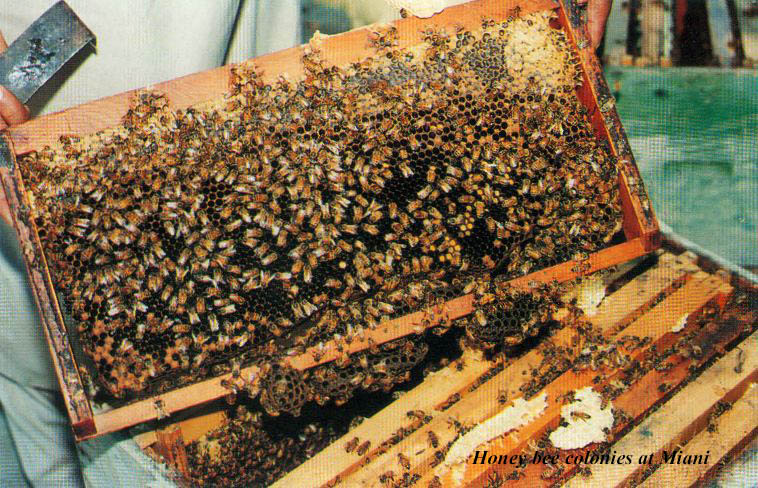 Forest and Wildlife Training School, Miani, was established in 1984, which provides 6 month training to forest guards and game watchers. Uptill now more than 800 forest guards and 400 game watchers have been trained in this school. Besides, 3000 farmers have been trained in nursery raising and tree planting techniques under various development projects. The school is equipped with teaching and extension materials.