SALIENT FEATURES OF THE FOREST ACT 1927

The Forest Act 1927 emphasises and seeks to consolidate the law relating to forests, the transit of forest produce and the duty that can be levied on timber and other forest produce. The Act contains 86 Sections and it has been divided in following chapters: 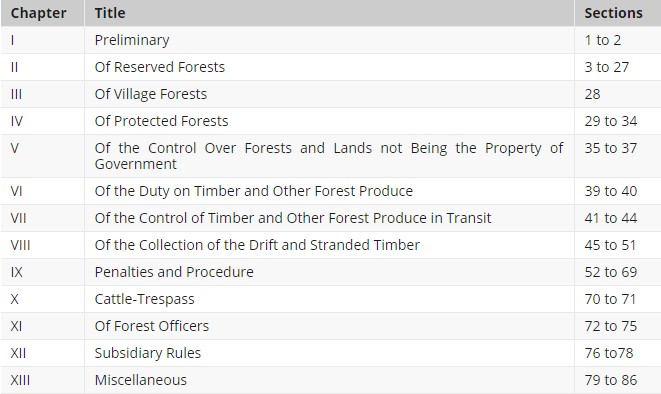 Offences under the Forest Act, 1927, on account of their peculiarity, differ from those under the Pakistan Penal Code in

the sense that as a result of the former, no one is personally aggrieved or affected by the injury inflicted upon the forests, and the vast expanses of it make the detection of offences difficult. Forest Offence has been defined under Section 2(3) of The Forest Act, 1927, “a forest offence means an offence punishable under the Act or under any rule made thereunder”. Forest offences have been classified into two broad categories. Firstly, there are trivial offences covered under Section 68, where offences may be disposed of by compounding (compromising with money). Secondly, there are offences which do not fall under the above category and they entail higher punishment, which includes imprisonment, confiscation of private forest produce, tools, vehicle and cattle, etc., and in addition, the recovery of an amount equal to the damage done to the forest as compensation in case of offences relating to reserve forest (Section 26). A third category of forest offences relates to cattle trespass. Such offences are disposed of under the Cattle Trespass Act, 1871.

The most restricted category is ‘Reserved Forest’. These forests may be constituted by the provincial government on any forestland or wasteland which is the property of the government or on which the government has proprietary rights. On the other hand, where forestland or wasteland is the property of the government, the Forest Settlement Officer shall proceed to determine subordinate rights in the land before a final notification is issued making the area a reserved forest. In reserved forests, most uses by local people are prohibited, unless specifically allowed by a Forest Settlement Officer in the course of settlement.

The provincial government is empowered to constitute any land other than reserved forests as protected forests over which the provincial government has proprietary rights. Under ‘Protected Forests’, the government retains the power to issue rules regarding the use of such forests, but in the absence of such rules, most practices are allowed. Among other powers, the state retains a power to reserve the specific tree species in the protected forests (Section 30(a)). This power has been used to establish control over trees, whose timber, fruit or other non-wood products have revenue-raising potential.

The Forest Act, 1927, establishes an elaborate procedure for the settlement of rights when a reserved forest is intended to be constituted. The settlement procedures require the Forest Officer called the Forest Settlement Officer (FSO) to consider the claims of the local inhabitants to certain usage rights, but leave ample discretion for him to relocate, revise or discontinue such practices. The provincial government is first required to issue a notification declaring its intention to reserve a certain tract of land, and appoint an FSO to inquire into the existence of any alleged rights in favour of local inhabitants. The inquiry by the FSO should not be confined to merely recording evidence produced by the claimants or ascertainable from the records of the provincial government. The FSO may call for an examination of any person who, he may think, has the knowledge of the facts, including the evidence of any person likely to be acquainted with the same (Sections 6 & 7). No new rights in the notified land may arise after such a notification has been issued, and those claiming any pre-existing right, have a period of at least three months to appear and assert such a right, and to make a case for compensation. Generally, rights which are not asserted during that period are extinguished, although there are provisions in extraordinary cases for later assertions until the final reservation order is published.

The Act anticipates three types of claims in forests proposed to be reserved. First, a forest dweller might lay claim to ownership of land. Second, a claim may be asserted for rights to pasture or forest produce. Finally, special provisions apply to the practice of shifting cultivation, which the Forest Settlement Officer may prohibit without any compensation. However, if the FSO determines that it is impossible, having due regard for the maintenance of the reserved forest, to make any settlement that would allow the practice to continue, he may commute the rights by the payment of money or grant of land or in such other manner as he thinks fit (Section 16). Notably, the FSO has no power to confer any right on the forest dweller.