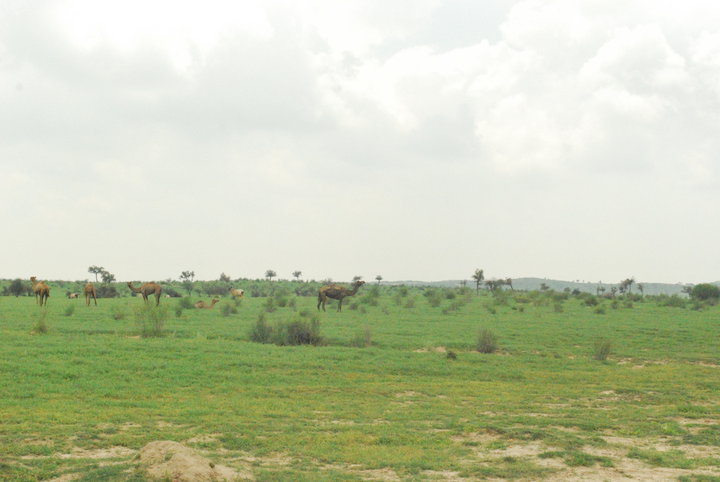 Production of food is dependent upon an adequate resource base - particularly the availability of land, water and energy. Most of Pakistan lies in the arid and semi-arid zone which is characterized by low precipitation, extreme temperatures, and low humidity. Sufficient food production for growing population with limited water supply and fragile land resource is only possible when they are used wisely and sparingly. Outside the irrigation system of Indus valley, most area of the country is used for extensive agriculture and rearing livestock.

Rangelands are ecosystems that play critical ecological roles which include: habitat for wildlife, source of biodiversity and pollution buffer. Furthermore, rangelands in Pakistan are a major source of forage for livestock, particularly sheep and goats. According to the report of Agricultural Statistics of Pakistan (1989-90), the population of sheep and goats has increased substantially over the last 30 years. The population of sheep has risen from 24.744 million in 2003-04 to 28.086 million in 2010-11, showing an average annual growth rate of  2% (approximately). Whereas the population of goats increased from 54.679 million in 2003-04 to 61.480 million in 2010-11 which an average annual growth rate of 1.25%. This increase has put more pressure on rangelands. On the other hand, rangelands are shrinking due to growth in human population with a need to allocate more area for crop production, house building and industrial development. Since the animal production systems in rangelands operate on low input basis, therefore, the problem of increase in grazing pressure will become worse over the period of time. The decline in vegetation cover due to grazing pressure will accelerate erosion and desertification of rangelands.

Productivity and vegetation of rangelands depend upon many factors such as type of soil, relative elevation, and climatic variation. Annual rainfall in 84% of the rangelands is less than 300 mm and droughts are the common feature in these areas that also affect the dry matter production. Moreover, quality of forage available from the rangelands can also vary, depending upon plant species, phonologically stage of plant and general climatic attributes. It is estimated that except alpine pastures in northern areas (1.68 mha), where dry matter (DM) production is about 1500 kg/ha, most of rangelands produce 100 to 500 kg DM/ha.

The arid lands in Sindh cover 60% of total land area of Province. These rangelands also support millions of people and their livestock as a source of fodder, forage, food and fuelwood etc. In the absence of canal irrigation, seasonal rainfall during Monsoon is only source of water in these areas. Keeping in view the importance of this natural resource, these lands have been recognized within fourteen priority areas of environmental concern in Pakistan as identified under National Conservation Strategy (NCS).

Registan lies in the districts of Thar, Mirpurkhas, Sanghar Khairpur and Sukkur covering the eastern flank of the province, which provides habitat for important fauna such as Partridges, Pea fowl, Sandgrouse, Birds of prey, rare Species of Chinkara, Desert cat, Indian wild Ass, endangered Houbara Bustard etc. This region encompasses 45,000 Sq. Kms with population of 0.76 million. It is characterized by large alluvial sand dunes. Approximately 10% of the total area is under cultivation. The south eastern portion of the region (Nagarparkar) does not exhibit extensive dune development. It is dominated by the Karunjhar Range which reaches an altitude of 300 meters. The range is surrounded by alluvial plains.

The Arid lands of Kohistan lies in the west of the river Indus, in Districts of Karachi, Dadu, Thatta and Larkana , wherein, the first National Park of Pakistan has been established for the protection of endangered Sindh Ibex (Capara hircus).It has extensive mountainous area, particularly in the south. There are several major drainage systems which discharge in the Indus during the infrequent period of heavy rains. Slightly less than 10% of the region is cultivated. The region supports estimated population of 0.302 million in an area of 43000 Sq. Kms.

These range lands support millions of local population and their livestock in terms of being a source of fuelwood, food, fodder/forage etc. The limited irrigation water resources and extreme environmental conditions limit to bring these areas under irrigated agriculture. Contrary to being potential resources these lands are legally categorized as “Wastelands” because of apparently smaller economic output as compared to the irrigated lands along the Indus valley.

The desert ranges of the Sindh province, which have degenerated due to over grazing and shifting cultivation, have considerable potential for livestock production, which is basic source of income for local inhabitants. Owing to drought conditions the livestock is mostly in poor conditions and fetches low prices as compared to animals from irrigated plains. The annual rainfall is life blood for these arid lands, which is usually very low and erratic. The environmental degradation and subsequent effects on the distribution of rainfall patterns at Global level has also disturbed the rainfall patterns in Pakistan, as a result of which these rain fed areas  received very little/no rainfall during past decade causing disastrous famine situation and mass migration of the local people and their livestock to the irrigated area and cities.

Periodic droughts are a major cause of desertification in the desert rangelands of the province. The drought in recent past for several consecutive years has led to a drastic adverse impact of human and livestock population. The productivity of these rangelands has been minimized due to over grazing, over exploitation of vegetation and frequent droughts. This has caused severe damage to the economy resulting in land degradation, reduction in milk & meat production and loss of biodiversity.

Drought produces a complex web of impacts that spans many sectors of the economy and reaches well beyond the area experiencing physical drought. This complexity exists because water is integral to our ability to produce goods and provide services. Impacts are commonly referred to as direct or indirect. Reduced crop, rangeland, and forest productivity; increased fire hazard; reduced water levels; increased livestock and wildlife mortality rates; and damage to wildlife and fish habitat are a few examples of direct impacts. The consequences of these impacts illustrate indirect impacts. For example, a reduction in crop, rangeland, and forest productivity may result in reduced income for farmers and agribusiness, increased prices for food and timber, unemployment, reduced tax revenues because of reduced expenditures, increased crime, foreclosures on bank loans to farmers and businesses, migration, and disaster relief programs. Direct or primary impacts are usually biophysical. Conceptually speaking, the more removed the impact from the cause, the more complex the link to the cause. In fact, the web of impacts becomes so diffuse that it's very difficult to come up with financial estimates of damages.

The drought in the Kohistan in recent past for several consecutive years has led to a drastic adverse impact of human and livestock population. The productivity of these rangelands has been minimized due to over grazing, over exploitation of vegetation and frequent droughts.

In addition, due to scarcity of water, the water resources of the area have not been recharged because of almost no rains fall for last 3-4 years and local people have to wait long hours to collect water from the wells. Women and children are spending six to eight hours daily to collect water. Hence, it is very essential to take necessary measures for developing water resources of the area.

District wise land available under the control of Forest department is as under: