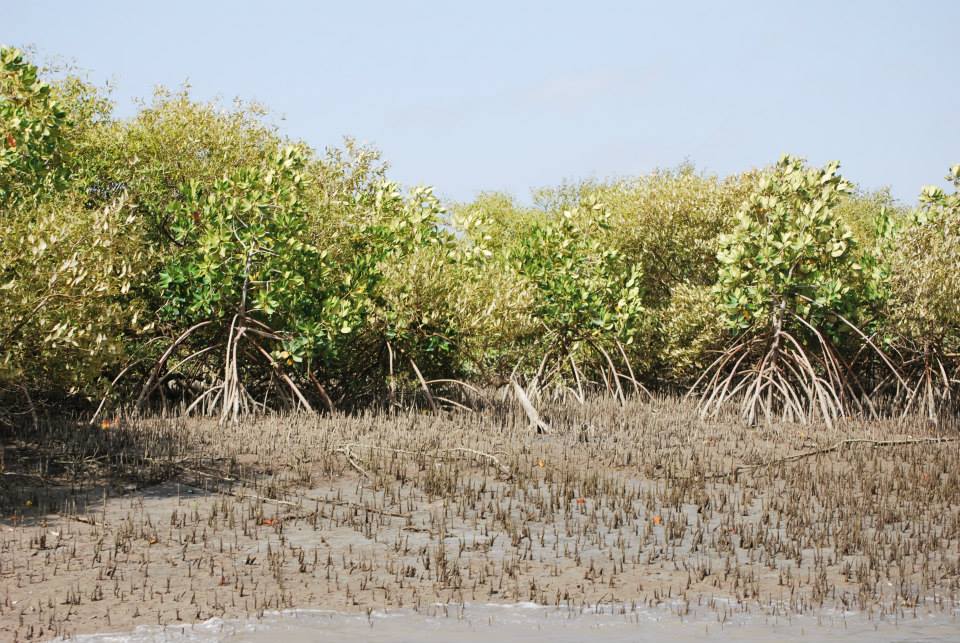 Mangrove forests of Indus delta, covering an area of about 600,000 hectares, constitute an important ecosystem in the coastal deltaic region formed by the River Indus. Indus delta mangroves are perhaps unique in being the largest arid climate mangroves in the world. They are almost entirely dependent upon freshwater discharges from the River Indus and a small quantity of freshwater from domestic and industrial effluents of Karachi.

The Indus delta mangroves are under the management control of three different organizations, which are as follows:

At present, there are four mangrove species found in the Indus delta:


Mangrove forest ecosystem of Indus delta is essential life supporting ecosystem providing habitat, shelter and breeding ground for a number of economically important wild fauna and flora. It acts as a barrier for the protection of coastal regions/ports against the disastrous natural phenomenon such as cyclones, wind storms, flooding and soil erosion etc.

The Indus Delta, provides subsistence to approximately 200,000 people throughout the year. About half of this population is located in Korangi area located on the southern outskirts of Karachi. While the remaining population is spread over the rest coastal belt to the Indian border.

The Indus delta mangroves are only found in estuaries between mean sea level and mean high water spring tides. At high tides, their roots and lower stems may be inundated, while at low tides the mangroves may be exposed for several hours. However, the extent of their inundation varies according to the tidal cycle. During neap high tides usually only the lower reaches of the mangrove swamp are inundated. While during spring tides, water may even reach the outer fringes on higher ground. The tidal rise and fall create a continuous changing environment. At high tides the roots are submerged with high saline water. During the monsoon, fresh water laden with silt and rain, reduces water salinity to great extent. Water movements also affect temperature, nutrients and oxygen levels in the soil and water.

The economic importance of mangroves of Indus delta could be ascertained from the fact that they provide important breeding zone for commercially important marine fish, shrimps, lobsters and crabs which help national economy to earn foreign exchange of US$ 100 million annually from exports besides; providing employment and livelihood to more than 100,000 people associated with fishing industry. It is estimated that 90% commercially important tropical marine fish species, especially prawn, spend at least some part of their life in the mangroves. If the mangroves are degraded then as much as 250,000 tons of fish caught off the Sindh Coast will be at risk (IUCN) in 1998. Pakistan earned Rs.2.24 billion from fish exports.

The Indus delta mangrove ecosystem provides habitat for fish, plants, crustaceans, birds, mammals, reptiles and amphibians. According to a Zoological Survey of Pakistan, 98 species of fish have so far been recorded in the Indus delta mangroves. Most of the fish are attracted towards mangrove swamps during high tide periods due to nutrient-rich food sources present in these areas. The presence of three species of lizards and 14 species of snakes exhibit a very good example of overlapping of terrestrial and aquatic fauna. The evergreen forests of Indus delta mangroves provide a habitat for many of the waterfowls. Migratory birds, such as flamingos, pelicans, cranes, cormorants, in floks of thousands visit the Indus delta for feeding, roosting and breeding from November to February every year. It has been observed that the population of migratory birds has declined due to degradation of habitat during the last decade. Similarly, the number of sea dolphins has also reduced in mangroves due to marine pollution.

Mangroves ecosystem in the Indus delta has been adversely affected in the recent years because of over exploitation of coastal resources due to coastal population increase, pollution and acute scarcity of freshwater from river Indus due to diversion of water for inland agriculture, coastal urbanization and industrialization. The situation is exacerbated by a general lack of education and awareness of sustainable use, on the part of communities, policy makers and implementers. Indus delta mangroves are dependent on freshwater discharge for their survival. Historically, abundant freshwater discharge and nutrient rich sediment load was conductive to a highly productive ecosystem including mangroves stands. With gradual and continuing reduction of discharge from the Indus, not only the transport of sediments to Indus delta mangrove has decreased, but also with the average annual rainfall being extremely low (221mm), and in some years, virtually no rain at all; availability of freshwater to Indus delta mangroves has been extremely curtailed. This combined phenomenon has put most severe environmental stress on the mangroves. Indus Delta at present receives the least amount of freshwater, leading to high levels of salinity and disruption to the ecological balance and loss of biodiversity.

Today, Indus delta mangroves forests have become monoculture. According to Flora of Pakistan, eight species of plants have been reported along the coast of Pakistan, out of which four species have completely disappeared, three species are at the verge of extinction and only one species, Avicennia marina is surviving in Indus delta. As a result these shrinking forests are not playing their full role as a shelterbelt against cyclones. The 1999 A-2 cyclone caused a very serious loss of life and property of coastal communities in Keti Bunder and Shah Bunder area of Indus delta. Keti Bunder and Shah Bunder are located in the southeastern part of the Indus delta close to the Indian border.

Loss of mangrove forests has environmental and socio-economic consequences including:
Mangroves are important for ecology, environment and livelihood of communities dependant upon resources produced and sustained by these vital ecosystems. They are known as sites of high biological productivity and as a natural nursery grounds for a variety of marine organisms. In terms of environmental security, mangroves reduce erosion by trapping sediments, stabilizing the coastal zone and thus protecting the coast from storm surges and cyclones. In terms of livelihood, mangroves provide edible (fish) and other utilizable resources (e.g. firewood) to the population living in the vicinity of mangroves.

Based upon the recently concluded projects and the  mangrove rehabilitation experience and considering the concerns of local fishermen about their protection, safety, wellbeing  and for sustainable marine resources development, this is high time to design and develop a kind of ecologically feasible  and community approved, participatory mangrove afforestation and conservation project to meet the guidelines of MTDF and aligned with the objectives of Pakistan Millennium Development Goals (MDGs) for sustainable economic system aimed at reducing poverty in coastal tract; thereby protecting existing forest cover / regenerating deforested areas and bringing new areas under forest cover.